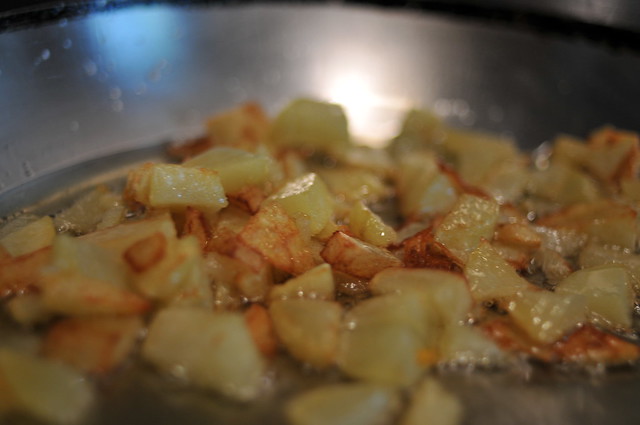 I’ve been working butter for the last few weeks. Out of tallow, out of lard, out of duck fat. Just butter.

Thank you neighbor for supplying us with the duck fat we need!

all better now. Pots are bubbling away in their duck fat bath.

Making Fritons today.  These are lovely, crunchy ducky bits.  They are the Gascon version of Chicharrón.  Duck skin and fat leftover from your gorgeous duck butchering boiled in fat.

I’ve not done Fritons before.  I asked our local duck farmer extraordinaire how to cook them.   She said, “just cook the shit out of them.” … but it was in French and I’m sure she said something more elegant and less American.

Once these little crunchies become crunchy, I’ll slot them out with a spoon and salt.  Fritons are a great snack that will keep you going until dinner.

I stumbled into this conversation about our breakfast. My breakfast or how I slept last night would fall under “conversations I’d like to avoid because I’m not emotionally ready to jump into that demographic.”. But there we were, Kevin and I, talking about breakfast. So, I explained what we typically have in the wee morning as the sun rises, the coffee brews and the little ones open their eyes to a fresh new day.

It starts off with some rye bread that I baked the night before.

Slap a nice, thick spread of butter. Not margarine … more like “this better be f-in butter, butter'”

Then add a thin slice of liver paste on top to seal-the-deal. Yeah, so I have foie gras connections, I’m lucky, but any pate made with love ( and garlic ) will do you just fine.

We eat a lot of animal fat ( grassfed mostly ). After extensive research by my husband ( funded by the “how to keep your wife hot” foundation ), I experienced great weight loss and body heath by adding a hearty amount of animal fat to my diet. Believe me, I have HUGE potential.

These little, not-messed with-old-grain deals, fried in fat and covered with yum keep you going all morning and afternoon. You can’t eat too many because they’re very dense.

I never put much thought to our morning meal until it unfolded during my discussion with Kevin. I feel that I’m losing touch with mortal life. When is the next X-Factor?!

Should you look up on the interwebs something to the tune of “how to make lard,” you will find recipes for making lard with a LONG-ass preamble of how unhealthy lard is and “gee, lard … oh wow … so unhealthy … oh but just like masturbating … I shouldn’t really … but oh I love it … oh here’s how to make it.” I hate this hee-haw, so here’s how to make lard without the guilt.  Because rule number one: Lard is good for you.  It is rich in vitamin D.  D!  Like that shit is hard to come by.  It’s just a matter of time before Frito-Lay slaps a “rich in vitamin D” sticker on their packages.  D is the shit, so take a puff.

Assuming you know your way around a stove or stovetop or “hob” (I can never write the word “hob” without giggling),  here’s the order and your day:

Your toughest obstacle here is finding a day and securing pig fat.  If you can’t secure a tractor to hang up the pig that you and your friends tied up, lifted up and slit its throat and collected the blood for sausage but just the first bits of blood, perhaps you can ask your local butcher for pig fat.  They usually have some in the back without a clue of what to do with it.  When the butcher fails you, reach out to your local pig farmer.  Oh they are there, you’ve never noticed because it wasn’t in the cool section at your fancy grocery store.  You see, food comes from farmers.  Crazy talk, but it is the truth.  Figure it out.  Get some pigfat.  And then:

–       if you get meaty bits in your lard, it will be “savory lard” thus limiting your use of such a wonderful fat

–       Like start your rye bread or think or something interesting that doesn’t involve you, you’re such a narcissist.

That’s it.  When you get a soupy, fatty, bubbly liquid of gold, you grab your sieve (oh yeah, get a sieve to strain the puffy fatty bits) and ladle that beauty in your clean jars.  Then, get on with your busy life.  After your jars cool a bit you need to find time to stick them in the fridge.  Don’t forget to turn off your hob.  You’ll turn it on again some other time, I’m sure.

Easy, now off you go.  When you’re done, you will have lard.  Lard for making great stuff that doesn’t involve unwrapping anything.